SCRAP Humboldt was created in response to the closing of the oldest nonprofit recycling center in the United States. United by their passion for environmental education and the arts, Tibora Girczyc-Blum, Patti Johnson, and Spring Garrett began the grassroots journey to become a member of the SCRAP network. What began as a community materials exchanges, quickly grew into a storage unit of materials and in 2012, the first SCRAP pop-up shop opened up. After the pilot project was a success, the doors opened in May of 2012.

SCRAP Creative Reuse was founded in Portland OR in 1998 by a group of teachers who wanted to find a home for their leftover classroom materials. They brought these materials to A Teacher’s Space, a resource center for Portland Public School teachers, and left them on a table for others to use. In 1999, an innovative teacher named Joan Grimm got together with a handful of her peers and received a grant from the Department of Environmental Quality to open a small creative reuse center for the community. 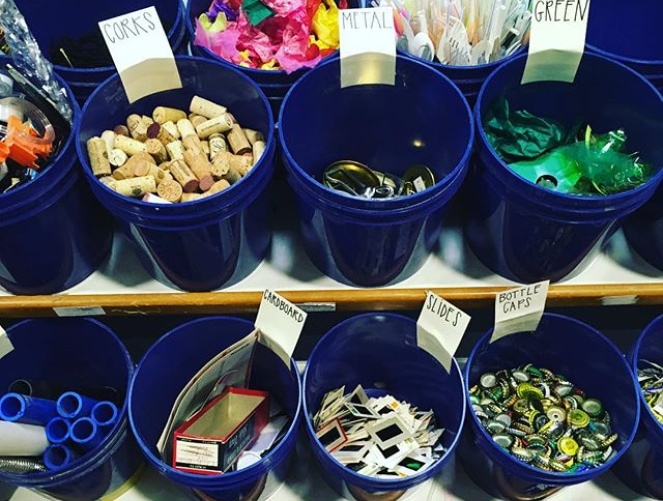 SCRAP Across the Nation

It’s tough to contain a great idea. Communities all over the U.S. are recognizing the value of having access to an organized creative reuse center. SCRAP USA has a sustainable business model of creative reuse service delivery that lends itself to replication by all communities. Dedicated and passionate creative reusers in other parts of the country have taken up the mantle and are establishing SCRAPs in their communities. Pay attention to the creative reuse love coming out of Portland OR, Baltimore MD, Richmond VA, and Ann Arbor, MI.

How to Get Involved

If you are interested in learning how to start a creative reuse center of your own, please check out the Getting Started page on our SCRAP Creative Reuse Network website.


We count on your generosity as an individual, foundation, corporate sponsor, or partner.

You feel the creative, environmental, and educational love from SCRAP. You return the love by adding to our resources so we can share with others. It becomes a circle of love that keeps giving – to you, to us, and to the entire community.